UNI/USD is traversing near record highs in early trading today as the broad cryptocurrency market has been energized again.

UNI/USD has gone from slightly under the 4.000000 mark in late December to highs of nearly 35.000000 as of trading this morning. Uniswap has been energized by the surge in the broad cryptocurrency marketplace and its ability to serve as a decentralized digital currency exchange for many traders.

Speculative fever has grown incrementally since the last day of February when UNI/USD was trading near 20.500000. The ability of the major cryptocurrencies to gain in February was not missed by Uniswap, which saw a high of 32.800000 approximately on the 20th of February. UNI/USD also experienced a reversal lower the last week of February, which saw volatility that was not uncommon to the cryptocurrency world.

UNI/USD is now ranked as the number eight digital currency via market capitalization, so it should be given attention by traders who are using cryptocurrencies as a speculative asset. One of the main drivers of Uniswap’s financial endeavors is to serve as an avenue where smart contracts can be exchanged via peer-to-peer trading. Uniswap is also backed my major financial funds who have invested in its business.

After attaining a record price in early trading today, UNI/USD has come off of its high water marks, but the 35.000000 still remains tantalizing close for speculative traders who have the ability to take risks. UNI/USD traded near the 34.800000 level today and current resistance looks to be around the 34.400000 after exhibiting a slight sell-off. However, if other major cryptocurrencies remain energized via their trading, and their ability to traverse near record highs near term continues, UNI/USD may be able to build speculative fever via this positive sentiment.

Traders need to understand fully the speculative nature of cryptocurrencies and risk management should be used. However, the ability of UNI/USD to produce incremental gains the past week-and-a-half of trading may prove enticing. If short-term resistance levels are punctured higher, traders may want to continue to pursue momentum based on the notion that a bullish trend remains intact.

Tactically, short-term traders should watch the 33.400000 to 32.880000 junctures below as potential support levels to become buyers of UNI/USD if they remain cautious, but also optimistic about the current bullish trend in the cryptocurrency marketplace. Speculators are encouraged to use limit orders to protect their prices fills when trading UNI/USD. 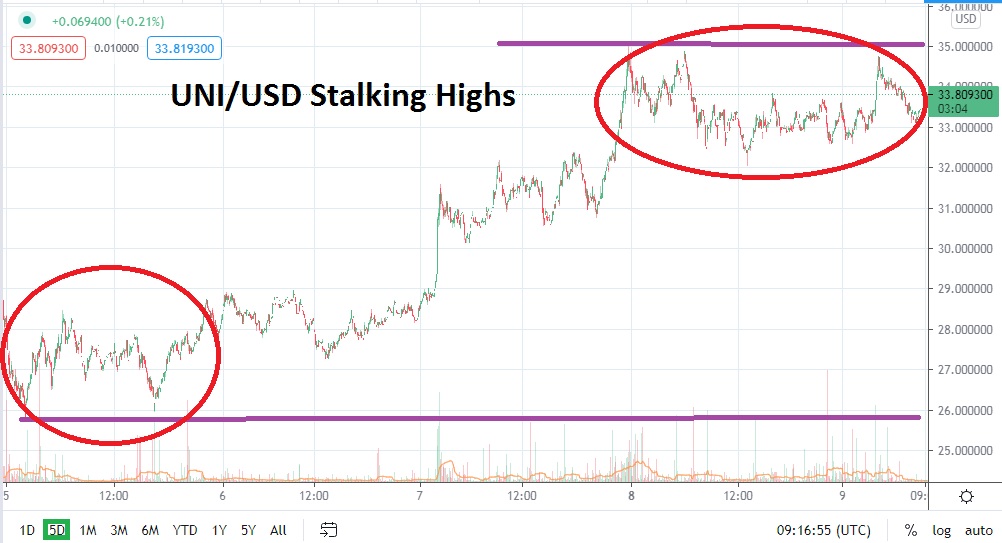 zkLink, the first Layer2 multi-chain integration DEX based on ZK-Rollup, will be launching