The financial system of the world has been largely influenced by the crypto market during the past several years. Cryptocurrency is considered the first most integral part of the crypto ecosystem and the second part has been assigned to DeFi or Decentralized Finance. In the crypto market, the launch of DeFi  is the most prominent addition as it is unlike all traditional finances. DeFi is a kind of finance that does not base itself on any central intermediaries like exchanges and banks.  DeFi is completely decentralized and runs through open-source software that can only be influenced by the consensus of its users. Currently, Ethereum is considered the most famous DeFi protocol in the world and it has been dominating the DeFi Market. However, almost 50% of the DeFi market is capitalized by Uniswap which has just launched its native coin UNI in September 2020.

In November 2018, a former mechanical engineer at Siemens, Hayden Adams created Uniswap in which many famous venture capitalists like Square ventures LLC, Andreessen Horowitz, Paradigm Venture Capital, and ParaFi invested. The biggest investment made in Uniswap was by the Ethereum Foundation with $100,000.

Decentralized exchanges (DEXs) have removed many obstacles for centralized institutions, but they also have their own problems to overcome. The most important and crucial problem in decentralized exchanges is liquidity. Uniswap has solved the problem of liquidity for exchanges to some extent as it enables the DEXs to swap tokens without relying on the liquidity created by buyers and sellers.

Uniswap is built on the Ethereum protocol and it allows users to perform the swapping of an ERC20 token. Uniswap does not charge any token fees and operates as a public good, unlike other similar platforms. Uniswap is cost-effective which means fewer fee charges at Uniswap as compared to other platforms due to the main feature that differentiates it from others, i.e., it eliminates the middleman. In simple words, Uniswap allows the users to perform transactions without the need for any intermediaries that ultimately reduces the cost of the process.

Uniswap protocol has a native token named UNI that gives its holders governance rights. It means that the UNI holder can vote on changes to the protocol. The token was firstly launched in September 2020. Uniswap is the biggest DeFi protocol in the world with a $2.9 trillion market share and it represents about 49.6% of the total DeFi market cap.

Uniswap Price Prediction for the Next 5 Years

Uniswap, developed by Hayden Adams, commenced the year 2021 with a trading price of $4.97. UNI/USD began to improve as the trend was bullish. Lately, UNI/USD hit $34.77 to record a fresh all-time high on March 7, 2021. It may even push higher with specific developments with its protocol, and the price might consistently grow monthly. Thus, Uniswap might trade at $75 by the end of the year 2021.

Uniswap might inaugurate the year 2022 at $78 as a bullish trend in crypto is expected to continue its rise. Uniswap might attract the focus of marketers as it presents a simple way to exchange coins. Thus, Uniswap might close 2022 somewhere around $180.

In 5 years, Uniswap is expected to grow its user base further. It might focus on newer plans to improve its protocol to make it more user-friendly. Therefore, the Uniswap price is likely to escalate to newer heights if buyers manage to keep their dominance over the years. It might achieve more investors as it produces higher liquidity. By the end of five years, Uniswap is likely to trade somewhere around the $300 mark.

The new iteration of the Uniswap protocol named Uniswap V2 was launched in May 2020 after its initial launch V1 in November 2018. The third version of Uniswap is expected to launch by the mid of 2021 and it is known as V3. Version 3 of Uniswap will decrease the cost of the process and will make it faster and more reliable.

Two of the most viable factors involved in determining the prices of Uniswap coin UNI are the environment of the general market and the launch of the Uniswap version. Previously when Version 2 was launched, the markets surged higher due to improved features of Uniswap. There is a high probability that the launch of Uniswap Version 3 will also prove beneficial for UNI as the prospects of it have already started getting priced in.

Apart from the upgraded versions of Uniswap, external factors like the competitor currencies and the king of the crypto market, Bitcoin, also play an important role in driving the prices of UNI coin. Bitcoin has been under pressure after crossing the $40,000 price level, but the environment is still not that bad and it could improve further, which will also push the UNI coin prices upward.

Moreover, with the Biden administration in charge, the outlook for the crypto market has started to strengthen now. It is because the two chief regulatory authorities SEC and OCC have now two crypto-friendly executives named Gary Gensler and Michael S. Barr. The prospects of the crypto market getting more famous and well known under the authority of these executives have increased and this could also favor the UNI coin prices in the future.

Uniswap is the largest decentralization application on the Ethereum blockchain. The advantages of Uniswap made it popular and helped it to triumph in record time. The features of Uniswap like user-friendly operations, integration of an external wallet, low fees, full control over one’s private keys, and comparatively high liquidity made the Uniswap protocol popular and raised UNI coin prices in such a short time. The Uniswap project was developed in just half a year with very little investment capital of only $100,000. The small investment of time and money quickly made Uniswap the most popular and reliable decentralized exchange.

The ongoing increasing popularity of Uniswap could be attributed to the feature of Uniswap that has eliminated the intermediary from the equation. This basic function of Uniswap to provide comparatively high liquidity plays an important role in boosting the prices of UNI coin in such a short period.

On September 17th, Uniswap entered the market with a trading price of $2.94 and in just two days of its initial launch, the UNI coin started listing on several exchanges around the world that pushed its price to $6.96. In September, the UNI plunged to $3.98, and then at the end of the month, it returned to $5.02.

In early October, the prices of UNI were pulled back by the market and declined to $2.57; however, it remained between $2 and $3 till the end of October. Shockingly, by early November, the UNI coin dropped to $1.80 due to massive selling pressure and by mid-November, prices reached their resistance level and remained at $3 with certain variations until December. By the end of the year, the UNI coin was trading at $4.62.

February has been a tremendous month for UNI coin as the launch of its V3 upgrade is coming closer, the popularity of Uniswap is increasing day by day that is eventually helping the value of UNI coin. UNI coin crossed the $20 resistance level on February 1st and reached $23 by 8th February. On March 7th, the UNI coin reached its all-time high of $34.

The technical side of UNI/USD is exhibiting a strong bullish bias on the weekly chart. Uniswap has formed an upward channel that is extending resistance in the area around $34.90. Lately, the UNI/USD pair has closed a bullish engulfing candle on the weekly timeframe that is suggesting chances of a bullish trend in the pair. A bullish breakout of the pair has triggered dramatic buying until at $41.40. Although the pair shows a bearish correction right now, the odds of continuation of the bullish trend remain pretty solid.

On the higher side, the UNI/USD pair may face immediate resistance at the $41.40 level, which is extended by an upward channel on the weekly timeframe. A bullish breakout at the $41.40 level could drive further buying in the pair until the next resistance levels of $47.54 and $55.39. The 20 periods exponential moving average is supporting an upward trend in Uniswap. The weekly MACD and RSI suggest a strong bullish bias in Uniswap; therefore, a bullish breakout at $34.91 could lead UNI/USD towards the $55.39 level, extended by a 161.80% Fibonacci extension level. 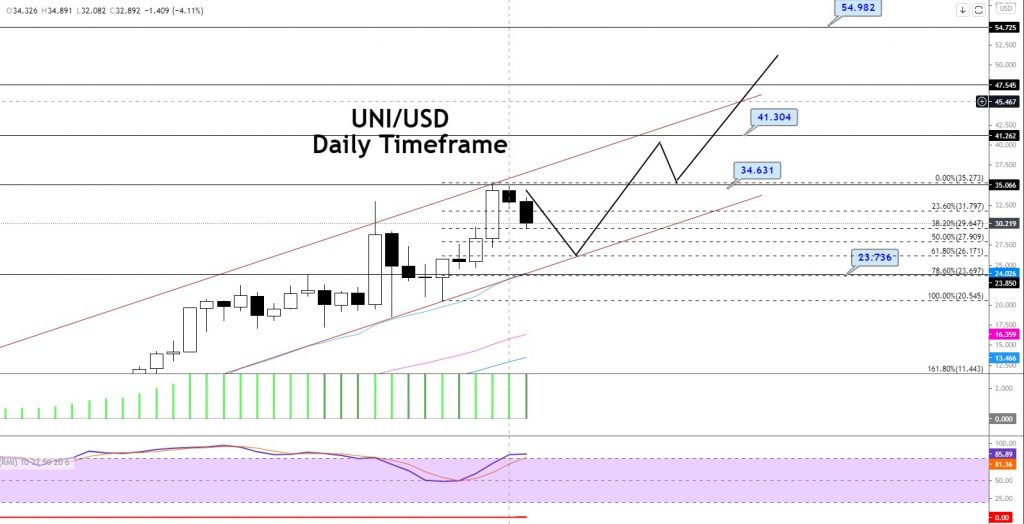 Taking a look at the daily timeframe, the UNI/USD pair has entered the overbought zone, and it is now heading lower amid profit-taking by investors. On the lower side, the Uniswap is pretty likely to go after an immediate support level of $29.64, which marks a 38.2% Fibonacci level, whereas a bearish breakout at 0.2964 can drive more selling until the $27.90 and $26.17 levels, which are extended by 50% and 61.8% Fibonacci retracement levels respectively. Despite this, UNI/USD is likely to continue trading bullishly, as the leading and lagging indicators support a buying trend. A series of exponential moving averages, such as the 20, 50, and 100 periods EMA, support the pair at around $23.736. Let’s consider staying bullish above the $23.75 area, to hit long-term target levels of $34.63 and $41.30. Good luck.